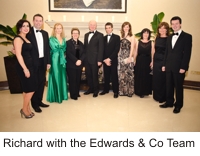 The great and good of the Northern Irish legal profession gathered at the Culloden Hotel on Friday 2nd December 2011 for the Law Society's Annual Dinner. The event is held to welcome new members of the profession and to celebrate the achievements of the most outstanding practitioners and recognise excellence both at individual and at practice or team level.

The team from Edwards & Co. was delighted to see the President's Award go to Richard Murphy. The award recognises the recipient's exceptional contribution to the development of the profession in Northern Ireland.

Richard was admitted to the role of solicitors in 1971 and joined Edwards and Co. on 1st July 1972, becoming Senior Partner in February 1974. After an illustrious career he became a Consultant in the practice on 1st February 2006. For Richard, being a solicitor has been a way of life and it is that dedication, with an ingrained sense of humour, that gained him recognition for his enormous contribution to the legal profession.

Richard represented the Police Federation of Northern Ireland through an extremely difficult period of our history and was never deterred by the numerous threats to his personal safety. Throughout his career he successfully demonstrated that our profession did not represent one side of the political or religious divide in Northern Ireland and that the profession was unbiased and equitable. As well as his police clients, other major clients ranged from local GAA clubs to Linfield Football Club. He diligently served his clients in all forms of legal work, from judicial reviews to criminal proceedings, occasionally managing to make time for his beloved conveyancing.

Richard has also provided a vital service over the years to a number of charities such as the adoption agency to which he has devoted time, commitment and endless energy. His professional services have been provided pro bono in a quiet and unassuming manner.

Congratulations to Richard from all at Edwards & Co.