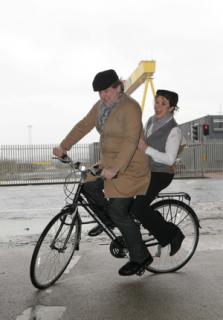 Cyclists and walkers in Belfast are being urged to 'step back in time' to the days of the Titanic and raise funds for a worthy cause in the process.

It is hoped that 1,000 people will take part in the 'Titanic Yardmen Cycle and Walk' in east Belfast on Sunday 1st April, to raise awareness and sponsorship for the work of Bowel Cancer UK in Northern Ireland.

Those taking part in the event are being asked to dress as a shipyard worker from the 1900s and everyone will be given a traditional yardman's 'duncher' cap to wear. Each person over the finishing line will also be given an old-style 'piece' or sandwich.

The event will start on the Connswater Community Greenway and finish at the Titanic slipways. It is being organised in memory of local businesswoman, Rosi Kirker-Miller who died from bowel cancer last year.

Dorcas Crawford, Senior Partner at Edwards & Co. solicitors, lead sponsor of the event, believes that it will appeal to people in Belfast and right across Northern Ireland.

She said:
"The Yardmen Cycle and Walk provides an opportunity to remember those in the local community who helped build the Titanic. Edwards and Company has a long history with shipyard men as clients and we're very pleased to support a cause that will provide lasting benefit for people in Northern Ireland."

Local actor, Dan Gordon, who will be taking part in the event said: "The yardmen played a significant role in the history of east Belfast. An event like this that raises money for a great cause is to be warmly welcomed - especially when they give you a cup of shipyard tea and a bun at the finish!"

Bowel Cancer UK, which has offices in England, Scotland and Northern Ireland, aims to raise awareness of the disease among the general public and also provides training and resources for healthcare professionals.

The event is open to people of all ages and levels of fitness. Advance registration for the event is required via Connswater Community Greenway www.communitygreenway.co.uk or www.facebook.com/connswatercommunitygreenway at £10 per cyclist and £5 per walker or child cyclist.

All those taking part are being asked to raise sponsorship to support Bowel Cancer UK's work in Northern Ireland. Those unable to attend the event can still give to the Titanic Yardmen Cycle and Walk by logging on to www.justgiving.com/yardmen